Duke and I met in October of 2015, I was a MOH in a wedding and he was a groomsmen. At the time he was stationed in Yuma, Arizona in the United Sates Marine Corps. Upon his arrival jokes were made about us two since we were both single and of course we hit it off. We continued our long distance relationship ( see each other every couple months ) when he was moved to Okinawa, Japan in August of 2016. We talked about marriage and knew we wanted to spend our lives together. In  September of 2017, Duke and I had plans to meet up with his brother in Illinois to begin and complete our marriage counseling. I had thoughts that I would return home with a ring because at this time I didn’t have one but I never imagined I would be a part of such a romantic and heartfelt proposal. 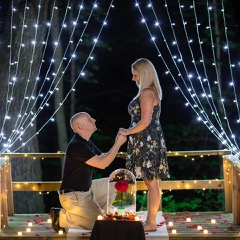 I was under the impression we were just taking some more couple photographs but boy was I wrong.The proposal took place at a place called Wilderness Chapel on a  baptist church camp ground. He had ordered a forever rose, had the woods lit with lights as well as the isle, a little blue box and the most precious proposal vows. It was absolutely breathtaking. 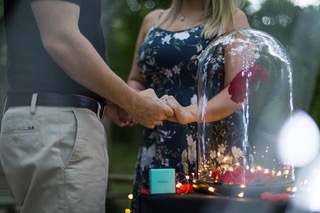 The wedding planning was stressful for me since he was still stationed in Japan but he helped as much as he could. My favorite part of the planning was deciding on the venue. We chose The Waterhouse Pavilion at Miller Plaza, due to the sentimental value it held for us. This was the venue our friends used which is why we were brought together in the first place. 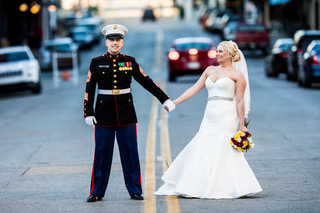 The most stressful part of planning for me was trying to find a place to host the rehearsal dinner that would accommodate us and within a reasonable price. My absolute favorite part of our day was when we saw each other for the first time walking down the aisle, that as a women that will forever be in my heart, mind and soul. 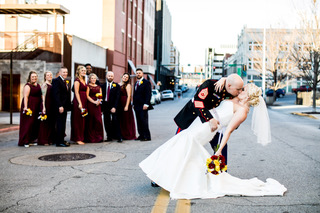 My only advice is to remember the day is about you and your groom, and at the end of the day you will be married. Also, make sure to invest in a planner/calendar, it was a lifesaver for me. 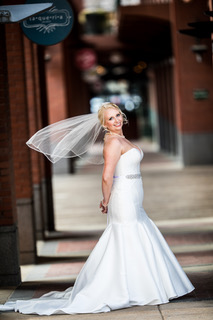 Gown by Essense of Australia